Picture it. 2002. Acton, Ontario. There was a French cookbook. It was French both ways: it was written in French and written in France. The recipe began with a simple instruction: start with two cups of leftover duck confit.

Leftover duck confit? Is that a thing? Making it takes forever and does not produce leftovers unless you have some kind of superhero-level willpower or a stomach the size of a walnut. More importantly, store bought duck is $35 a bird, and ducks have giant puffy skeletons sheathed in skin and about a quarter inch of flesh. Okay, to be fair, it’s a bit more than that if you buy the well-fed ducks from a farm instead of hunting them like Dad did (which also requires that you serve them with in a peppercorn sauce to disguise the occasional bit of birdshot you forgot to pick out).

Anyways, the point is, there’s not a lot of meat on a duck, and it takes a long time to render down into confit, so any recipe that starts with the assumption that you have two cups of it on hand probably also assumes that you also cook your ducks in batches of twelve. I imagine the person who wrote the recipe imagined that I would go downstairs and ask the kitchen staff to bring the blue ceramic bowl of leftover duck confit it to me, draped in a cheesecloth from the cold cupboard in back. Probably minutes before I shrugged and handed one of them the recipe with the instruction that I would like cassoulet for dinner.

This is the seething mess of resentment from which I created my own cassoulet recipe, and every one of the variations since. Because I am never going to have two cups of leftover duck confit lying around. That’s not who I am.

Maybe I should have started with that: tonight we’re cooking cassoulet.

Cassoulet is a rich, slow-cooked casserole containing meat (typically pork sausages, goose, duck and sometimes mutton), pork skin (couennes), and white beans, originating in southern France. It is named after its traditional cooking vessel, the casserole, a deep, round, earthenware pot with slanting sides. If you don’t speak French, try saying cass-SUE-lay (kind of like Chevrolet, only edible).

If you have read any of the other recipes I have posted, you probably have an idea what you’re in for next: I’m going to give you a recipe that sounds a lot more like a choose-your-own-adventure than a set of instructions. For the record: I do know how to write down very, very precise instructions that can be followed accurately and precisely every time. One of the first gigs I got was writing bilingual instruction manuals for industrial uninterruptible power supplies. And yes, that’s every bit as exciting as you imagine it is.

So, let’s get to the good part. Winter is coming to a close, and last weekend I decided to do another one of my cold weather, stick to your innards recipes: cassoulet.

“Cassoulet, that best of bean feasts, is everyday fare for a peasant but ambrosia for a gastronome, though its ideal consumer is a 300-pound blocking back who has been splitting firewood nonstop for the last twelve hours on a subzero day in Manitoba.”

What you are about to get is inspired by the traditional recipes (which I have actually followed, for the record), but it has been broken down and re-built for modern times and people who don’t have an eternity to do fussy French cooking. When we’re done, you and your family are going to be warm, well-fed, and fundamentally bone-deep HAPPY. That’s what I’m aiming for here, and you should be too.

This recipe is in no way, shape or form, low-calorie, low-fat, or any such thing. It will stick to your ribs, and threaten to coat them in a nice layer of winter insulation.

We’re going to get started with the meat. Find yourself a really deep (2″ or more) frying pan, or a big pot, as long as it has a lid. The whole recipe is going to get built in there, so I need you to make sure that you have some room to work.

Pour yourself a glass of a full-bodied red wine. I have a shiraz going right now.

You need to make some meat choices. You need at least one of the following, or a mix of this stuff that is somewhere between a cup and a cup and a half of meat:

Then add more meat (another cup, if you please):

Chop up a medium cooking onion and put it in with all the meat except the duck confit if you actually have some. Somewhere between medium and high until things start to brown at the bottom of your pan, and then slowly back the heat off.  Try and get the edges a bit brown, the meat mostly cooked through, and the onions golden, and we’ll start adding things in.

Put all that into the pan, plus the duck confit if you had it. Once the pan is at a low simmer, put the lid on. Cook it at least 30 minutes and no more than an hour, popping by to stir it every 10 minutes or so. In the last ten or fifteen minutes, you can remove the lid to boil off some of the liquid and thicken it up. You want everything to blend together, and the sauce to thicken up. 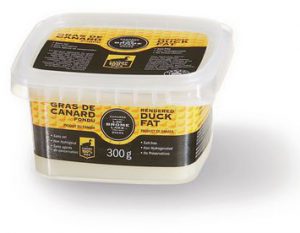 If you had that bottle of red wine around still, you’re allowed to pour some in to the cassoulet. How much is some? I don’t know, but it’s less than a cup.

If for some reason you got nervous when browning the meat and strained out all the fat, even though I very clearly didn’t mention anything about it at all, put some of it back in. Or some duck fat. If you don’t own duck fat, you might want to fix that, ’cause it’s all kinds of fun.

Serve your lovely cassoulet with a simple green salad dressed in a sharp vinaigrette, fresh crusty bread, and the full-bodied red wine (assuming it didn’t all end up in the pan, in which case open a new bottle).

Cassoulet can be prepped long in advance and is the perfect thing to re-heat on a busy night or perfect for low-stress entertaining. The recipe easily doubles to feed a crowd. 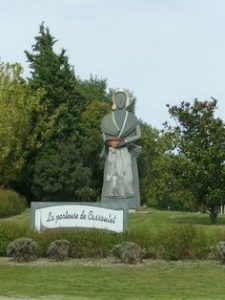 Cassoulet is serious business. There is a fraternal society, the Grande Confrérie du Cassoulet, assembled to ensure the quality of the dish by conducting surprise taste tests throughout the region.

The cassoulet region of France extends 80 miles, from Toulouse to Carcassonne, with the town of Castelnaudary situated squarely in the middle.

At the town center of Castelnaudary is a bronze statue of a woman holding a cassole.