Bees, a Mason jar, and a Cardboard Box

Bees. They’re industrious pollinators that make so much of our diet possible. And they’re fuzzy.

I’ve always loved bees. As a child, I liked to collect them. I would wander out into the fields and watch them move from flower to flower. In the morning they seemed to have more purpose, zipping purposefully between blooms. As the afternoon wore on, they seemed to acquire a sonambulance, drifting drowsily in the thickening air.

I wanted to take them home with me to study, even though I knew that there was no way I could provide adequately for them. I took a glass Mason jar out into the field to catch them. The first few are easy, but the difficulty level climbs rapidly after the fourth bee. You don’t want to do this with honeybees. They are too nimble and solve problems too quickly. Bumblebees are slower, fluffier, and generally drift upward. You keep the mouth of the jar pointed toward he ground. You remove the lid, holding it over the opening until you are close to your next target. Then you bring the jar downwards over the bumblebee, enclosing them in the glass and tightening the lid a quarter turn quickly. For some reason, their escape tactics were biased heavily towards “drift upwards” never “drift left or right or down”.

All this to say, the young me managed to get a startling number of bumblebees in a single Mason jar. At some point, they aren’t so much flying around in there as velcro-ed to one another in a frustrated cloud. Proud of my achievement, I wanted very much to show these lovely creatures to my friend Tisha Moffat, whose house bordered the edge of the field. A simple plan. Walk over there, show her the bees, then maybe take them back to the field and release them.

It was late afternoon, approaching dinner time. I’d been so lost in my task that I’d missed the sound of my mother standing on the front porch and calling for me. “KEEEEER-sten! KIEEEER-sten!” Normally, my ears were quick to pick up on such cues, but faced with the warm, buzzy challenge of collecting the maximum number of bumblebees you could stuff in a glass jar, I guess I hadn’t heard her through the first few rounds. The neighbours had picked up the message and were keeping an eye out for me. Mrs. Moffatt saw me approaching from the direction of the field through the screen door. She phoned my Mom to let her know I’d been sighted. “Yes, Lindsay, she’s out front of my place, heading this way. She’s bringing a jar of something.”

I could see Mrs. Moffatt on the phone, cord stretched tight from the kitchen, as I reached the steps to the front porch. There were two, maybe three, steps to climb. In case you’re wondering, there is a very significant difference between two and three. If you don’t have the count right (and I didn’t), then the odds start to climb rapidly that you’re going to trip. I point this out as someone who was spent a lifetime running into obstacles, and I can tell you with certainty that the difference between two steps and three involves a rapid change in my angular direction, some small amount of acceleration, and the sudden termination of an exciting, but abbreviated arc through space. Or, in layman’s terms, one Mason jar filled with bumblebees smashed all over the front porch, littering the space with shards of glass and angry bees trying to un-velcro themselves from one another and exert their will on the universe.

“Never mind. The jar’s gone. Yes, yes, it’s broken,” said Mrs. Moffat. “What was it? I’m not sure.” She rested the phone against her shoulder and called out to me, “Kirsten, your Mom is looking for you. What’s that in the jar?”

I was horrified. I had no idea how I was going to show my collection off to Tisha now. “Bumblebees,” I responded, my voice quavering. “I wanted to show them to Tisha. Is she home?”

Mrs. Moffatt took a moment to assess the situation. The glass glittered in the late afternoon sun. The bees buzzed around with the kind of angry energy that you almost never see in a bumblebee. There was a quiet resignation in her voice as she returned to the phone. Let’s just say that no one was particularly surprised by this turn of events.  “Bees, Lindsay,” she said into the phone, “Don’t worry, she won’t be bringing them home. She’ll be there in about ten minutes.”

Ten minutes? What’s she going on about, I wondered? My house was only three houses away. It wasn’t going to take that long to walk home.

Mrs. Moffatt disappeared into the house, then returned. A dustpan and broom were shoved out the screen door, then she closed the screen door and the wooden front door quickly and firmly.

My interest in bees has persisted over the years. I still find them utterly fascinating. When I finally had a rural property, I was sure that I was finally going to do it. I was going to get my own hives. I read book after book. I joined online groups to learn all about it. I made contacts locally. I watched all of the different kinds of bees already resident on my property with great interest. I even watched the wasps. My husband had different inclinations towards wasps, having had a bad experience with a nest of mud wasps in his youth. I watched all of them with wonder, he purchased cans of wasp killer and ruthlessly pushed the wasps out of each and every hive they started in the soffits.

I was going to help save bees. Give gifts of honey, beeswax candles, and mead to my friends and family. I was going to do my part to ensure that bees continued to thrive in our world. My backyard was pesticide free. Most importantly, I was going to have a permanent, front-row seat to watch the action.

After solemnly considering all of the options, I selected an apiary in Barrie. The fellow who ran it was an amiable sort, and he was willing to spend some time coaching me over my first two years helping make sure that I mastered the art of caring for them. This was pretty important to me, because I had horrified nightmares of finding my hive dead one morning. 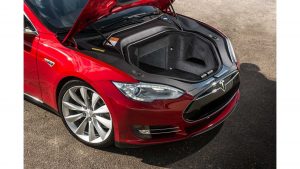 The plan still had some holes in it. I was going to drive up to Barrie, pick up my starter colony, and bring them back to Acton. Since the trunk space is open to the main cabin, I was thinking that it would probably be a better idea if I put the box in the frunk. That’s the cool thing about a Tesla… with no combustion motor taking up space up front, I could put the bees in there, and that way, if any of them got out, they’d be in a sealed space away from the driver.

Of course, if my life went the way it normally went, the cardboard box would develop some unexpected structural weakness and the bees would get out. The most likely place for that would be while I was driving back down HIghway 400, because being stung repeatedly while driving would produce the most spectacular accident that highway had ever witnessed.

I cancelled the order. I still wanted the bees, I just harbour deep suspicions about any plan that involved me successfully navigating that many kilometers with a box of bees. It was considerably larger than a Mason jar, you see.

Months later, I moved to a condo, and for now, all hopes of beekeeping will have to wait.

You’ve made it this far listening to me wax poetical abut bees, why don’t you take a look at some of Sam Droege’s photography. He has a team that have been doing macro photos of bees and other insects to create online reference catalogues to help researchers identify the thousands of species across North America.

Here’s a link to an article with a few of their prettiest images, and if that makes you want to see more, you can see the entire archive on Flickr.