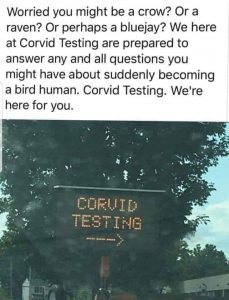 Tonight’s post came together because a friend of mine re-posted a joke about a random sign typo (“CORVID TESTING”) on Facebook (image to the right). Not content to simply laugh and move on, I felt compelled to respond with:

If you have (or suspect that you have) contracted CORVID, you can’t get together in groups. So no murder of crows, unkindness of ravens, scold of jays, or parliament of magpies. [Admit it, the group names for corvids are the absolute best. They’re supposed to be the titles of my first four novels. I’m way behind plan.]

That’s when my brain decided that it was important that I assemble a collection of cool facts about Corvids, because they have fascinated me since I was a child.

Stress-busting tip: if you’re sitting there fussing over something, try reading some poetry. And when I say reading, I mean that I literally want you to sound the words out loud. Preferably while standing. There is something about doing this that interrupts some of those negative patterns rattling around in your skull. And on that note, I’m going to do the obvious, and provide you a link to Edgar Allen Poe’s The Raven over at The Poetry Foundation, where I have more stuff bookmarked than I care to admit. Let me know if this trick works for you.

What’s a Corvid, you say?

Corvidae is a family of passerine (big, fancy word meaning feet that are adapted for perching) birds that contains the crows, ravens, rooks, jackdaws, jays, magpies, treepies, choughs (pronounced “chuff”, because English is weird), and nutcrackers (pronounced “nutcrackers”, because English is weird). In common English, they are known as the crow family, or, more technically, corvids.

21 Cool Facts About Corvids (or, put another way, CORVID-21)

This concludes Kirsten’s random tour of cool facts about Corvids. I threw out more than I kept, trying to keep the list to just 21 facts, all in the name of a fairly lame pun title.

Merely this and nothing more.