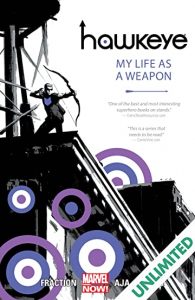 SPOILER ALERT. The following post contains Hawkeye content from the comics that may spoil parts of the upcoming TV series. If you’re a comic fan, you already know this stuff. If you’re going to watch the new TV show without a comic backstory, I’d stop reading here so that you can be surprised by one aspect of the character.

Still with me? Arright, I did warn you.

So, I’m getting excited about the upcoming Hawkeye series on DisneyPlus. That’s not a huge surprise… Marvel is baked into who I am. I’ve been getting over my reservations about the idea of Marvel being bought by Disney. Originally, I was worried that they would ruin properties that I have loved for decades. Then I saw the trailer and images for the new Hawkeye series, and I had to re-assess. It was entirely possible that Disney could be a great thing. I might just get a new favourite holiday viewing out of this! A new action flick with things crashing and blowing up to Christmas music (think Run DMC doing Christmas in Hollis in Die Hard).

I’m a geek. I can accept that. I am such a big geek that I assigned myself homework to get ready before the show came out. I decided to read the Matt Fraction comic series that the show will (at least in part) be based on. I’ve downloaded them from Comixology onto the iPad and started working through the content.

I was amazed. Not only was I enjoying the story, I was being transported by HOW they were telling it to me.

Look at the frame above.

We’re looking into the rear view mirror of a car. There are three Minis chasing this car through traffic. There are at least two people in the car, as you can see with the different “voices” depicted by different styles of text box for each voice.

Shot by shot, scene by scene, a movie was unfolding in front of me. I could see this car fight scene in live action perfectly. Each beat of the action was so clear to me, and at the end of the sequence, when Hawkeye is knocked unconscious, the frame went black. It was so perfect, I made Mike flip through the scene with me when I am reasonably certain he was trying to sleep. I even figured out how to get the iPad to screen capture me reading a comic (yep, we’re gonna count that among my dubious skills that aren’t going on the resume) so that I could show everyone how cool this is. That clip is down below.

This probably isn’t going to be the only Hawkeye post from this series, because there is more really cool stuff later. The artists (David Aja and Javier Pulido) have developed this visual language that I cannot wait to see develop over the next few books. They are teaching me to read the story visually now, so that when the sound disappears later on I am already trained to figure out the plot based on context, not the text boxes.