The Smell of Two PDP-11s

This story begins where so many stories begin: a warehouse. It was the middle of July some time in the nineties. I was expecting a shipment of some gear I needed to ship out to Boston later that afternoon. I was sending servers to a nice fellow in Boston. Everton had told him to picture me as a 6’4″ black woman with shoulders like a linebacker. I pictured Eli as slim guy in his mid-thirties. He wore dress shirts that had been washed too many times, so they were thinning to near-translucent in places, which didn’t show, because he wore a lightweight wool sweater over them. He replaced the collar stays once a year. He probably had three very well-behaved children.

In short: neither of us really knew anything about the other.

I did know that he needed these servers to act as spare parts to a unit that was holding a satellite up in the atmosphere somewhere. You don’t swap those machines out for new ones… you keep patching and repairing them until they die. At which point, I imagine, a satellite crashes to earth, hopefully somewhere unpopulated.

This story has nothing further to do with that satellite. I hope you weren’t too attached to it. It is a MacGuffin and has already served its purpose. 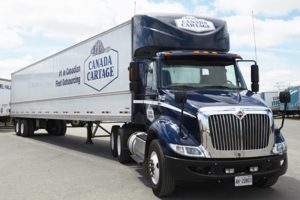 A buzzer sounds, signalling that the truck has arrived with my shipment. I head to the back of the warehouse, and roll the door open to the loading bay. The Canada Cartage driver gets out of the cap and shouts back at me, “Its not locked. You can unload”, and he wanders off a distance to smoke a cigarette.

I drop the dock plate into position with a clang, kicking it over until it falls into the notch. I undo the two door locks on the back of the truck, and open it up.

Before I know it, I’ve recoiled several steps into the safety of the warehouse, gagging. The smell is unexpected. Sure, it’s summer and the city doesn’t usually smell great in the heat, but this is something else. It’s rank, with undertones of saponification. Sorry, did I sneak a big word in there? It’s the technical term for the chemical degradation of animal fats with a hydration reaction where free hydroxide breaks the ester bonds between the fatty acids and glycerol of a triglyceride, resulting in free fatty acids and glycerol.

Sorry, I got distracted. Let’s try this one more time: the smell of partially roasted dead beaver rolled out of the back of that truck like its sole purpose was to make sure that not a single ounce of food or liquid remained inside my body. I’m trying to control the impulse to gag and my eyes are watering. I squint into the back of the truck, with is wavering, either with the intense heat of the summer sun in an enclosed space, or my impending unconsciousness.

There they are, my two PDP-11s, right up front. That can’t be the problem. Yes, as technology goes, they are a tad old, but dead servers smell like dust and ozone. Way in that back are two other skids covered in fur. I hold my breath, instantly regretting having sucked in extra air beforehand, and move in closer. Not covered in fur. It is two skids covered in beaver pelts. Each is stacked about three and a half feet high. They’re not perfectly clean, or cured, and definitely not shorn and ready to be made into beaver coats. They are a great many days closer to living beaver than they are to a stole.

I lurch out of the back of the truck and out the back door of the warehouse, gasping for clean air.

“Are you KIDDING me?” I snarl incredulously at the driver. “What the hell is that about?”

He shrugs and holds out a clipboard. “Not my problem. I picked up two loads, I’m dropping off two loads. Unloading is your problem.” I look at the truck, focusing blearily on the logo, which appears to be mocking me. I must be hallucinating.

I sign for my two servers and trudge back into the warehouse resignedly. Somehow or another I get the pump truck in motion, and wheel out each one of my servers. I slam the warehouse door and stare at the two offending pallets. Damned if they both didn’t smell rancid. It’s all plastic and glass and metal and it shouldn’t be able to pick up a scent like that, but they HAVE. I have two PDP-11s that reek of week-old dead beaver. I guess it has soaked into the pallet. I’m on my own today, so I can’t possibly slide them onto a fresh pallet. I grab the roll of shrink-wrap and, after confirming the serial numbers, try to wrap the skids and servers in an airtight seal. It doesn’t seem to be working. I’m reasonably certain the smell has somehow leached into my skin. I processed the order, called UPS, and not all of two hours later, shoved them back out the door again on their way to Boston. The UPS driver looked like he wanted to ask me a question about the smell, but he never worked up the nerve, so I didn’t have to answer. Neither of us were happy with the situation.

Some time around four thirty, Craig came back to the office, and I pretty much burst past him in my rush to call it a day. Unlike the UPS driver, Craig wasn’t going to be dissuaded. “What on EARTH is that smell?”

“Okay.” Craig paused, and thought about it for a moment, “I’ll bring some Lysol into tomorrow.”

It is a great many years later, and to this day, I cannot look at or think about PDP-11s without smelling beaver pelts in the summer sun.