Let’s talk about the hair

I started dying my hair when I was fourteen. It was first year I had a grey hair, but that’s not why I did it. What I had was straight, dark brown walnut-coloured hair. What I wanted (at that time) was red hair. It started off with temporary rinses and escalated to home dye jobs quickly. I spent the better part of a decade exploring the hues between chestnut and French burgundy red (which is not really a human hair colour, unless you are familiar with the hair dying habits of Québécois women during the eighties).

By my twenties I had more grey hair than my mother did. This remained true the rest of her life. I know this primarily because I have seen my roots. I’ve had a natural head of hair only two points that I can remember between age 14 and now. The first one was after I interviewed for my role at RBC. I’d just had one of those perms where you and the hairdresser simply cannot communicate with each other. I wanted loose body waves in my long hair, and she interpreted that as “curls tighter than a show poodle.” These things happen. So, I cut it all off and arrived my first day at RBC with almost four centimetres of my grey-streaked walnut brown covering my head. The last half of each strand was still trying desperately to curl, so I looked like a damp, recently shorn poodle. The second time was last summer. We were about two months into the COVID-19 lockdown, when I was going a bit nuts from the hair growing long enough to touch my ears, and was unable to get to my hairdresser. My husband and I watched G.I. Jane, took out the clippers, and shaved each others heads. It was a fun evening. Stop cringing: it’s just hair, and it grows back.

What I had always wanted was one of two things:

I was getting further away from the first ideal with every year, as the dark walnut started drifting towards a medium brown, with a boatload of white, silver, and steel grey strands mixed in. To add insult to injury, as I grew older, I became prone to a slight wave in my hair. No one was ever going to look at me and think indigenous.

Time for Plan B. I wanted my rainbow-hued hair. I was dying it anyways. Everyone advised against it. It would get me fired from my current job. It would stop me from getting future jobs. Even if I didn’t get fired, it would stop me from advancing in my career. My family would hate it. People would be nervous around me in public, feeling that I was somehow a threat.

This advice drove me nuts. It’s hair. I’d been dying it most of my life. None of these people had ever SEEN my natural hair, so how on earth could they be advising that I stick with “natural” hues? More importantly, why was everyone conflating my hair with my skills, my morals, and my beliefs?  If I lost my hair and went bald, would I be a different person to these individuals? If I did chemo and my hair became thin, changed colour, or texture, would it mean I am a different person? Do they re-consider my professional aptitude each and every time I get it cut or permed, or the henna comes out more mahogany than chestnut?

I began a hunt for a hairdresser who would help me solve this once and for all. I made three failed attempts before I found my match. The first two interpreted “I want pink and purple hair” as “put some highlights in that are on the reddish side of brown”. The third one bleached my whole head to snow white and then added a set of indigo bangs. Okay, points for effort, but on that day, not exactly what I was looking for.

I am pretty sure when I first met Jessica Patterson that I repeated the phrase “non-human colours” far too many times, hoping against hope that she’d believe me. She asked where I worked, and I said the head office of a bank, and I could see the hints of doubt in her eyes. Was she finally going to do this for me, or was I going to have to try again? 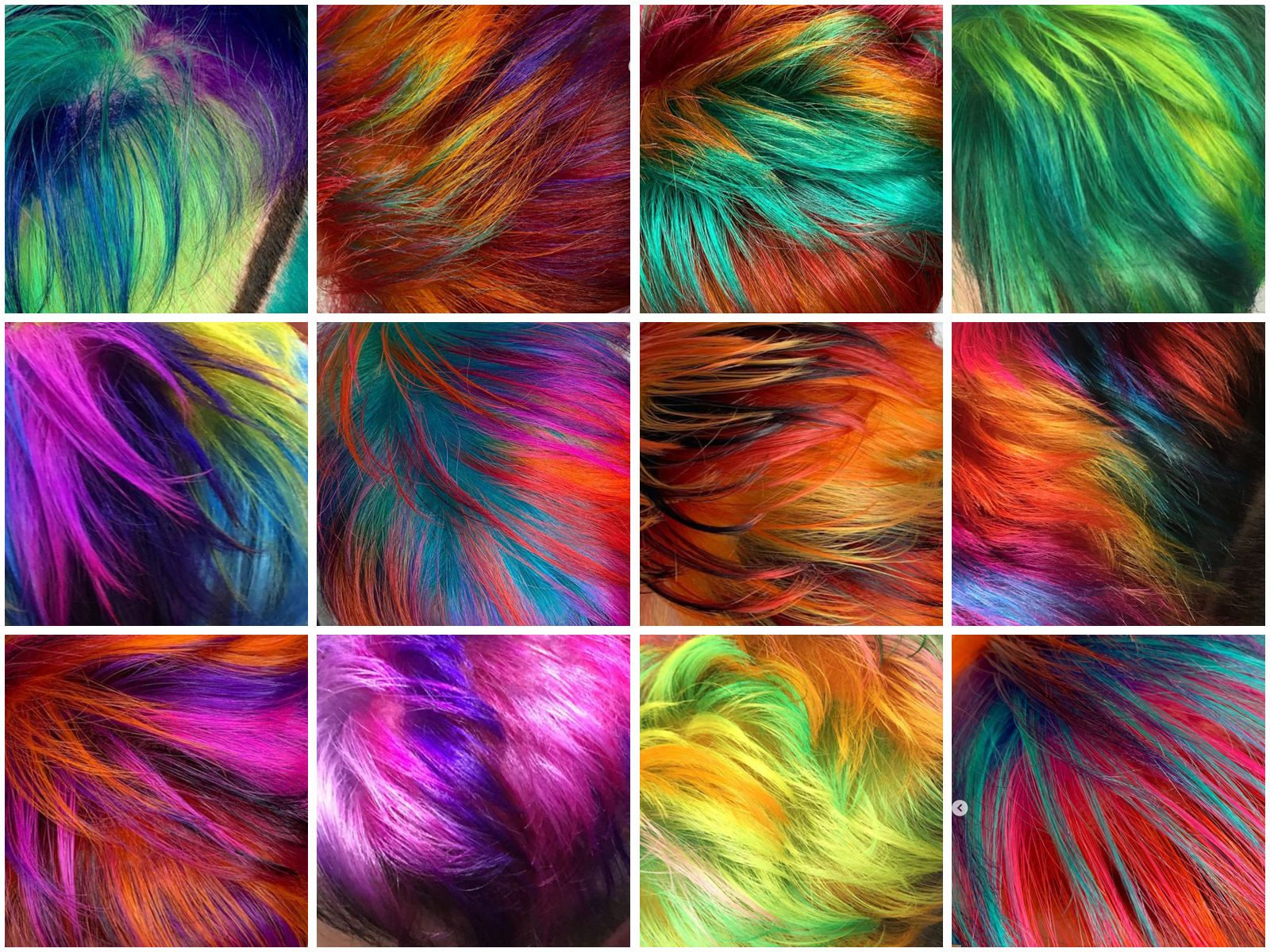 Victory. In time for National Indigenous Day, we shaved my hair into bit of a Mohawk style, bleached it down and dyed it RBC blue with some yellow-gold in front. It in honour of an event that I was participating in, it was very clearly our corporate colours, and it was still a risk. I went in to work that first morning half expecting that I would either be written up or terminated. No one senior to me in my direct food chain said anything the first week, positive or negative. But my friends, colleagues, and people I had never, ever spoken to before were all in favour. I did eventually get some pushback from a few executives who suggested that this was going to be an issue in my career advancement, but I was not required to dye it back to brown.

The biggest surprise reactions were the two polar opposites of the age scale.

Children love the fun colours unreservedly. They point and smile and clap. Teens to twenties came up to me and asked me what kind of work I did, and how on earth I could have hair like that and work at a bank? They’d been told the same things I had been told my whole life: if your hair is funny, if you have tattoos, if you have piercings, if you are in any way different from the ideal, you won’t get ahead in this world. It broke my heart to think of a whole generation behind me being raised with the same constraints that were handed to me as I entered the working world. More importantly, it meant that when clients walked into our branch, we were showing them a very specific image of what was considered “acceptable”, and it was an image that was going to leave so many wonderful people on the outside. If it isn’t okay for “those people” to be employees, maybe they shouldn’t be clients, either. It was sending the wrong message: one of exclusion. The more I thought about it, the more I realized how very important it was that inclusion be visible at all levels of an organization, from the most junior employee all the way up to the top. If I lost my job, I wasn’t going to dye it back to brown just to fit in again. I wanted to work for a company that valued diversity. I’ve spent some time trying to explain this in working environments since. I think things might be loosening up, but on other days, I get the distinct impression that the only reason I got away with it was that I was older, had some rank and power, and had already spent three years proving my value to the company.

At the other end of the spectrum were the fifty-plus crowd. A fairly substantial chunk of this group would light up visibly when they saw my hair, and at least one person walked over to me every three days to ask how I got my hair to do that, and did they think it was possible for them to do so as well? ABSOLUTELY. I wasn’t the only person who had been frustrated by a lifetime of instructions encouraging conformity. The absolute best part is that once your hair is naturally white, you pretty much have a blank canvas!

My hairdresser Jessica has risen to every challenge I have posed her so far. When I say challenge, I’m serious:

Sometimes I walk in with an idea of what I want, other times I just let Jessica break out whatever new colours have arrived on her shelves. I’ve been asked if I worry about this approach, but here’s the thing… Jessica’s great, there have’t been any hideous failures, and even if there were, I am perfectly willing to shave it all off and try again in a few weeks. My hair grows pretty quickly. The closest we’ve come to an abject failure was the day I asked her to try and give me silver hair. I wanted it to look like tinsel. We bleached my head, but not all the colours came out, so there was more bleaching, toning, frantic consultations with the rest of the staff… at the end of it, what we had was greyish with an odd pearlescent rainbow sheen over it. You know you’ve taken a wrong turn when your hairdresser says, “We can work on it some more in a week…” when cashing you out.

I can tell when Jessica is super-excited about the newest creation. When she rinses out the dyes, she wraps that towel around my head like it is a national secret. Other staff members see her nearly dancing about in excitement, and start looking my way to see what emerges when the towel finally comes off. Sometimes, that’s the best part… listening to her ooh and ahh as the light shines on the new colour creation.

All told, I’m so happy I finally took that risk so long ago for National Indigenous Day. I’ve had all sorts of fun experimenting, and in just eight weeks, we’ve been able to shave the sides, cut an inch off the top and try a whole new experiment. I now feel like my natural hair colour is “rainbow”, and I’m not sure anyone at work would even recognize me if I walked in with my natural colour. I have had some incredible conversations with complete strangers, hiring mangers, and people who were forced to admit that I am not suddenly less competent because my hair isn’t brown, and therefore someone applying for a job with blue hair isn’t in any way unable to do the work because of their looks. I have proven that someone can send a drink to me easily sitting in a chair by the pool on a very large cruise ship with no more instruction than “I’m not sure where they are sitting, but their hair looks like seaweed under a black light.”

I have no idea how to wrap this post up, so I’m sending you off to listen to Hair being sung by the original Broadway cast.