It is a premise frequently accepted, that a man in need of urination, must be in want of privacy. Experience, however, has suggested–

No, no. Sorry. Let’s back that up. That’s not the right place to start this story. Let’s re-set the scene. If you need a washroom break, now would be a good time to take it, so you can focus better on the story when I resume.

Going on safari is one of my greatest joys. I love the process of scanning the distance for wildlife.  I watch the far distance, the guide tends to scan the middle ground, and my fellow tourists tend to focus on the immediate proximity. Depending on who calls out the name of an animal, you can guess how far away it is. One of my greatest finds was locating a leopard because of the silhouette of a single ear in a tree at just about a kilometre and a half. That’s a story for another day.

Finding lions isn’t as difficult as one might imagine. They have some habits that make this considerably easier. They congregate in prides and sleep. Lions sleep. A lot. I can’t understate this point. I have seen lions sleep in Tanzania, in Namibia, in Zambia, and in Kenya. I did not see lions sleeping in Malawi, but the only reason for that is that I spent the whole time conducting a beach holiday at a freshwater lake that felt like a land-locked ocean. I am confident that there were sleeping lions in Malawi, had I bothered to go out and look. 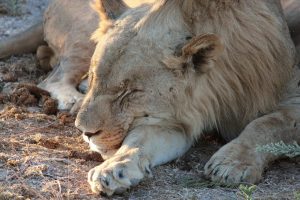 Lions sleep with great determination. I have watched a Range Rover drive up to within five feet of a sleeping lion and sit there with the engine idling, whilst the lion’s only reaction to the intrusion was an insolent flick of an ear, followed by a yawn, and rolling over. Lions sleep with the single-minded focus that ants apply to gathering food, with every fibre of their being. As a result of this proclivity of lions, I have far too many pictures of sleeping lions. Lions on their backs, lions on their bellies, lions flopped over other lions. I have a few action shots of lions yawning, which can be obtained if you’re willing to sit there watching a sleeping lion long enough. I’ve a few pictures of lions walking sedately to a new napping spot and a few of lions mating. Locating a pair of lions mating doesn’t require skill so much as ears. They are noisy, and repeat the process over and over again, so eventually, even the densest of explorers will feel compelling to follow the sound and figure out what the ruckuss is about. And yes, in case you are wondering, mating is preceded by naps, punctuated by naps, and followed by a good hard sleep.

What I wanted was an action shot. A lion hunting. A pack of lionesses pulling down a wildebeast or zebra. Something that stirred up the dust, and might even result in a slightly blurred image if I could adjust the camera fast enough. Something that suggested that lions were actual predators instead of giant stuffed animals flung out on the veldt to sleep.

The plan was being carried out in Namibia. After two days of poking through Etosha National Park, we were visiting a small private reserve that shared a border with Etosha. We stayed at Ongava Lodge. Our hut had what was hands-down the best bathroom on the planet, where you can see rhinos at a waterhole at night.

The area was frequented by a trio of young male lions. This coalition of brothers hunted together. None of them were of a mind to go out and challenge a male with a pride of lionesses just yet, so they were living the batchelor life. That meant that they had to hunt for their own dinner, none of this sitting around, waiting for the wimminfolk to bring down a wildebeast for dinner. I was excited to hear about this, because I felt like my odds of seeing a lion in motion had dramatically increased.

Now, you’d think it wouldn’t be hard to find three lions in a small private game park. You’d be wrong. We had an incredible day exploring the area, and it might just be my all-time favourite park, but we saw absolutely zero lions. No lions hunting, no lions sleeping. Not even the tiniest hint. The driver suggested that perhaps they’d nipped off to visit Etosha, since the fences between the two parks were fairly porous. I sighed and accepted it, because it had been a stupendous day.

I mean it. We found a tiny African wild cat (the size of a house cat) and lots of white rhinos. Breathtakingly gorgeous and rare white rhinos. It’s like stumbling upon a dinosaur (or a heavily armoured cow). Towards the end of the day, we had one of those moments that you’re never, ever going to forget. A black rhino with a calf that couldn’t have been more than three days old. The calf was tiny, perfect, and just about knee-high to its momma. The birth of a rhino these days is pretty much a world-shaking event, and here we were, staring at a baby. The mother was absolutely aware of how important her tiny charge was and lost her temper immediately upon spotting us. She snorted, stomped angrily, postured aggressively at us and shooed her baby into the brush as fast as she could. We didn’t follow. With such a young rhino, we didn’t want to do anything whatsoever to stress either the baby or the mother. They were too precious. Also, momma rhino could flatten our vehicle and all of us if she had a mind to do so.

None of us had actually gotten a picture of the pair of rhinos during that brief encounter and we wanted to be able to take proof back to the station. We weren’t terribly far from a waterhole, and thought that perhaps that was where they were heading. We decided to hang out at the waterhole and see if we could find the rhinos again. 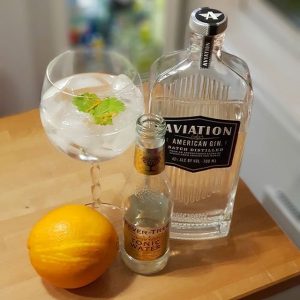 If you’ve never been on safari, you might not know that high end camps take the old British colonial thing very seriously. It’s part of the experience. As the sun begins to set, your driver will find a nice place to pull over with good visibility for a long way, and set up for sundowners. A picnic basket will emerge from nowhere, and before you know it there will be a table set up with a tablecloth, crystal glasses will be arranged on them, and a mini-bar will teleport down from wherever wood and brass mini-bars are stored. All hail the British empire. They will mix you up the cocktail of your choice, and on this day, we all went full traditional and were having gin and tonics. Medicinal, of course. Add quinine to water as a “tonic” and you can treat malaria, and to balance out the bitterness add gin and some lime, giving you a dose of Vitamin C to prevent scurvy, too. With a few more deft motions, tiffin tins start appearing with nuts, dried fruit, cookies and other nibblies to help sustain us until dinner.

So there we are, enjoying our gin and tonics by the waterhole. Waterholes can be a great way to see wildlife. All sorts of grazing animals skitter up to the water’s edge for a drink, keeping a wary eye out for predators, who enjoy waterholes as sort of an Uber-Eats situation. The first drink turned into a second, and no sign of the rhinos. It looks like we’d made enough noise that they weren’t going to chance the waterhole while we were there.

The next image shows Ongava serving sundowners in one of their regular spots. This image isn’t near the waterhole. It’s in a nice clear spot.

One of the fellows who was out with us that day answered the call of nature. If you put enough gin and tonic in a person (plus the ever-present water bottles in our Range Rovers), then eventually you will fall prey to the need to relieve yourself of all that liquid. This fella had wandered off a little way from the group to find a tree. I drifted with him, keeping an eye on him as I scanned the distance for that back rhino and her calf. That’s when I saw the black-tufted tip of a tail in the brush by the treeline. I called out softly to the guide, “Lion” as I tried to get the lens cover off the camera and into my pocket, power the camera on, adjust the settings, and focus on the big cat. It was slinking our way. “Lion,” I repeated a bit louder, with a bit more edge in my house. “Zip it and get back to the jeep,” I hissed at the fellow taking a leak. He got moving with impressive speed and the sad loss of much of his drink as he hurried out of there.

The lion wasn’t so much slinking any more as doing a slow lope. Damn, it was hard to focus. The guide was shouting and banging pots and piling people into the two Range Rovers. Michael was tugging at my vest, making it even harder to keep the camera pointed at the lion, who was now actually moving at a decent clip. I was sort of jogging backwards, trying to get the shot. I could see it, clear as day. I was actually going to have a shot of the male lion running straight at the lens, and it was going to be glorious with the golden light of the setting sun on his fur… This was going it be–THUD. My butt slammed into the vehicle, and Michael helped pull me up and into it.

So, let’s see the photo…

National Geographic will not be hiring me any time soon. I had a shot of the ground, a shot of some random shrubbery, and a shot of the sky and my left elbow. I did not have a shot of a male lion charging towards it’s gin-soaked prey. The driver moved us a safe distance away and the lion stopped running and lay down. It wasn’t hungry enough to keep going. We cleaned up spilled drinks and headed bak to the lodge as darkness fell.

I have no idea where his two brothers were. Perhaps if we had been a bit slower, they would have shown themselves and reminded all of us why you do not sit by a waterhole drinking gin and tonics. I don’t have that photo, the one I could see so clearly in my mind. What I do have is a keen appreciation of how effective even a half-assed lion hunt can be when they’re not sleeping.

On that note, I will leave you with The Tokens singing The Lion Sleeps Tonight. Unless, of course, there is a tourist out taking a leak, in which case, the lion is slinking towards him right now.