My Mom, a Piano, the Gutenberg Printing Press, and Stephen Fry

My mother and the Piano 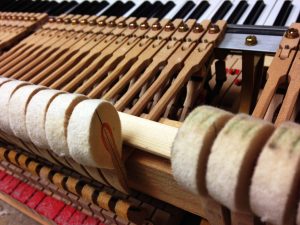 When I was young, my mother would play the piano. I remember the feeling of that music. Each note was something separate and unique. There was something about it that was physical: I could smell it, feel it, and see it… not just hear it.

A piano isn’t quite like a harpsichord or clavichord… the notes are formed by a hammer. I can see the hammer moving, sometimes, when I hear a piano playing. The hammer shank rises then falls. The hammer head is made of felt, glued to the wooden hammer head, and when it strikes the wire it immediately rebounds in the opposite direction is if it has been cast off by the force of the sound, only to be caught by the back check and held in place. The strings are held at an high tension over the cast-iron frame, and when contacted by the hammers, they vibrate. On their own, this would only produce a faint sound, but they are not on their own, they are linked to the soundboard, which acts as an amplifier of the sound waves generated by the strings.

When I hear a piano being played, I hear wood. Rich and brown, warm and living. The sunlight comes down the stairs from the front door, and if I lie in that patch of light on the floor by the piano, magic will happen.

I hear high carbon spring steel, shaking and vibrating through the air like broken ice and birdsong. I hear the whisper of felt against steel, trying to muffle and soften and temper the sound, sheep’s wool and lanolin buffered by leather. Tiny hints of oil and the brittle dryness of real elephant ivory. Underneath it all, the frame, like the bones of the earth, carrying the sound down into the floor, so I could hear my mother’s left hand move across the keys.

Mom’s feet work the pedals and she rocks slightly as she plays, as if she is wrestling the sound out of this device by some larger physical act. Her clothes brush faintly against the wood of the bench as she shifts, her arms stretching across the keyboard. Her fingers flex and strain, psoriatic arthritis frustrating her as muscle memory fights against calcification. Even her breathing is part of the work, sometimes held in as she tries to quiet this wooden beast to wring out a sweet melody, sometimes blowing out, catching faint motes of dust that drift in the beams of sunlight like tiny golden specks.

When psoriatic arthritis stole the ability to play the piano from my mother, I hated it so very much. I missed the ability to lie there and imagine other worlds to the sound of her playing. I poked at the keys, teaching myself how to thunder through enough of Grieg’s In the Hall of the Mountain King to pretend I was actually playing the piano… but I wasn’t. I could hear in my head all of the sounds I couldn’t coax out of the instrument myself, and the gap between the symphony in my head, and the miserable plinking of my keys drove me nuts.

Sometimes I would sit at the piano bench in the late afternoon sunlight, watching the light dance on motes of dust and drift down to collect on the time-yellowed sheet music that bore the faintest scent of coffee, and just run my fingertips lightly against the keys, testing the action ever so slightly… just enough to raise the hammer and lower it, oh so controlled, back onto the strings without making a sound. My brother Andrew learned to play a number of instruments, something I will always envy, as I can see in him that same line of talent, living still. Mom volunteered at the Constance Lethbridge school, picking up American Sign Language (ASL) that would later augment her conversations, adding layers of discussion I wasn’t always catching because I didn’t actually go to the classes. I enjoyed the challenge, though, because it took the spoken word and added richness to the dialogue, and I became increasingly aware of silent fights and jokes on buses, hands flashing silently in a whole world where I was the one lacking a skill, only catching fragments as they skittered past.

This morning I watched Moonlight Sonata: Deafness in Three Movements, which is “a deeply personal memoir about a deaf boy growing up, his deaf grandfather growing old, and Beethoven the year he was blindsided by deafness and wrote his iconic sonata. Their lives weave a story about what we discover when we push beyond loss.” As I watched, and listened, I was carried back in time, remembering sounds, and how they had both a mechanical and an emotional weight for me. I watched this family adjusting to their son’s hearing loss, and the grandparent’s struggles with cochlear implants acquired late in life. The story on the screen reminded me of the sweet ache of a transition from sound to silence, only to find that in silence there was a different beauty. When the grandfather and grandson both turned off their hearing aids so that they could enjoy the peace away from the demands of the speaking world, I was charmed, remembering my own grandfather choosing to turn off his hearing aids now and again to escape my grandmother’s demands. He would have the tiniest twinkle of a smile in his eyes, the slightest twitch of his lips as he did so, and you could see in his eyes, clear as day, to please not tell Grandma for a little while. 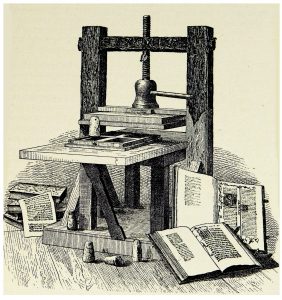 So how do we transition from my Grandfather’s hearing aids to a printing press? It’s a much smaller leap than you might imagine, at least as distances are experienced inside my mind.

My enjoyment of music is linked to my enjoyment of engineering. The levers and hammers of the piano were a tactile joy, one that served as a foundation for how I found joy, pain, hope and triumph in music. I enjoy engines and take an almost visceral pleasure in the simplest ones performing as they should, clean and clear and mathematically perfect. My father taught me to recognize mechanical problems based on the sound of an outboard engine, the pacing of the sound, finding slight wobbles and inconsistencies that meant we had deviated from the perfect note, the sound of correct operation. Even in retirement, he fashions small steam engines, machined out of brass, where a fraction of a millimetre will introduce friction that will interfere with the perfect dance of parts sliding against each other with only the smallest amount of machine oil to ease the motion.

This is the incredible thing about being human. We can be clever creatures, designing machines that make our lives easier. There is one in particular that fascinates me: the printing press. This device appeals to a hacker’s heart: it democratized information, making it available to the world. Ideas could be shared across the planet, bringing education to more people, and giving their voices a chance to be heard in more places than we ever imagined possible. To me, the seeds of the Internet were born in the printing press.

A gourmand is a person who takes great pleasure and interest in consuming good food and drink. Gourmand originally referred to a person who was “a glutton for food and drink”, a person who eats and drinks excessively; this usage is now rare. Stephen Fry and I share this in common… we both know the delights of consumption, and while the textbook definition does not include it, our appetites extend to information, consuming words as though they were wine. I admire Stephen Fry as a Humanist, but also for a unique pleasure he offers: the sound of his spoken word. When he talks, the words fall from his lips, round and plummy, sharp and sibilant. The sound alone is exquisite, made still more so by the well-reasoned content.

The second section will encourage you to explore the Gutenberg printing press two ways. The first way is via podcast. Stephen hosts an incredible show entitled Stephen Fry’s Great Leap Years – the stories behind inventions. The podcast explores topics ranging from the rise of humankind as the inventor, to the astonishing combination of persistence, investment and inspiration it took to create the Gutenberg Press and the communication technologies that created our world. It tells the story of how our lives have been transformed by a fascinating and compelling mixture of human decision and vision, greed and need. While I believe, with every fibre of my being, that you should listen to all six episodes, I am providing you a link to the episode that discusses the invention of the Gutenberg press. While listening to this podcast, I could see in my mind’s eye, the device being constructed, each astonishing on its own, but the sum of the total exceeding the value of the parts. Stephen’s voice painted images for me that I could see, hear, smell, and imagine the feel of the press clamping down firmly in much the same way that my mother’s piano was not just sound, but a world unto itself.

I enjoyed the podcast immensely, only to later realize that there was a video available through Timeline: The Machine That Made Us (Gutenberg Printing Press Documentary). Here was Stephen Fry again, only this time I could see each item he had described in the podcast.

I invite you to re-create my experiment. It will take two hours out of your life. On the first day, try the podcast, and let Stephen take you through the colourful tale of the creation of the Gutenberg Bible. On another day, try it again on YouTube with the visuals. Grab your kids for the second one… they should get a chance to see how very many inventions all needed to combine to create even a single printed page… and the imagine how the moveable type created as a physical object needed to be transformed to the digital to become the text and emojis on our screens today. [Yeah, I’m totally going to circle back to that topic in a later post…]

Did you “see” the story during the podcast? How did what you saw and felt contrast (or match) what happened when you watched the video?