I am feeling great. I decided that I was going to do an entire challenge in one weekend: the Inca Trail. It’s only 42 kilometres, so it’s a good choice. I figure after this I am going to enjoy on more short challenge (Mount Kilimanjaro) and then plunge back into a longer challenge that will take months to finish. I actually planned to do Kruger Park next, but they’re re-designing it between here and the end of August because the current route’s streetview is decidedly unsatisfying… folks expect to see animals. So would I, if I was there! Oddly, I had started to plan a trip starting in South Africa for after we got back from the month in New Zealand trip, but since the New Zealand trip was cancelled… ARGH. Focus!

My clanking heap of medals remain satisfying, and I am considering figuring out a way to hang them off of a dowel or something in my office to show them off. When I started this, I thought I might finish one challenge and that would be that… and here I am starting my eighth, and planning out the next two after that. I have no idea why this particular motivation is working for me, but it is and I’m leaning into it hard for as long as I can. If I want to enjoy an active retirement, I need to get into the habit of daily workouts.

This challenge comes with irony. When I was in Peru a few years ago, I had an opportunity to walk the Inca trail, but I did not. I chose not to on two very simple grounds: 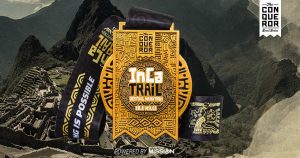 So, it turns out I was right. After spending a week at sea level, exploring the Galapagos islands on the National Geographic Endeavor II, I found the rapid ascent into the mountains produced that same queasiness I had experienced in Tanzania. They told me in the airport to chew the coca leaves, and the feeling would recede. I brushed past the initial thought (“Wow, there’s a basket of coca leaves in the airport, and that’s certainly not going to be true on the way home…”) and decided to give it a try. It tasted like dry leaves and the faintest hint of battery. It didn’t do a thing for me, as far as I could tell. Maybe it would have if I spent all day chewing on them, but I gave up long before that. I also tried the coca candies, which were successful at moistening my mouth, but utterly useless at stopping me from wanting to hurl randomly.

I only did the smallest chunk of the real Inca trail from the end of the train ride, and I feel that my original choice remained solid. Almost all the walking I did was uphill or downhill, with a challenge I hadn’t foreseen: it’s super humid in a rainforest, therefore are surfaces are wet and/or covered in slippery moss. I only ended up on my butt twice in a day, but I was being VERY careful. Also, there are stretches where the path is essentially a narrow stretch along a rock face, which makes me think that people in Peru aren’t clumsy. Not the live ones, at least.

So to make up for the local experience, I just did the Inca Trail in Mississauga and London over a long weekend. The timing was oddly well-aligned… it was hot and humid the whole time, so I got to sweat in a decidedly convincing manner. If anything, it might have been cooler (if decidedly more humid) if I’d been walking in Peru at some points… a mild fourteen degrees.

If you want to see Macchu Picchu, you can see my photo album here. I’ll share a picture of me not-walking the Inca Trail in Peru before the postcards from the app. 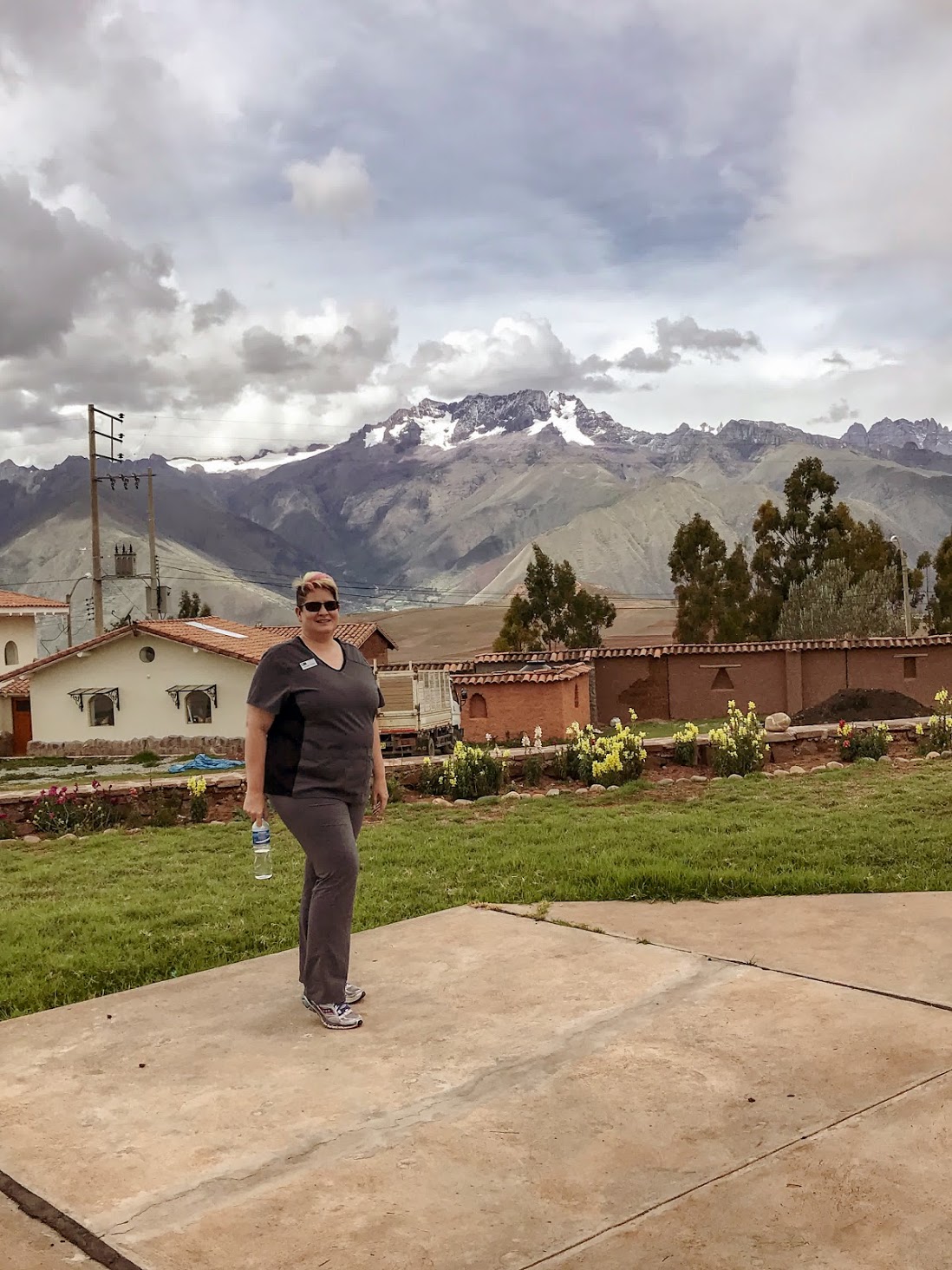 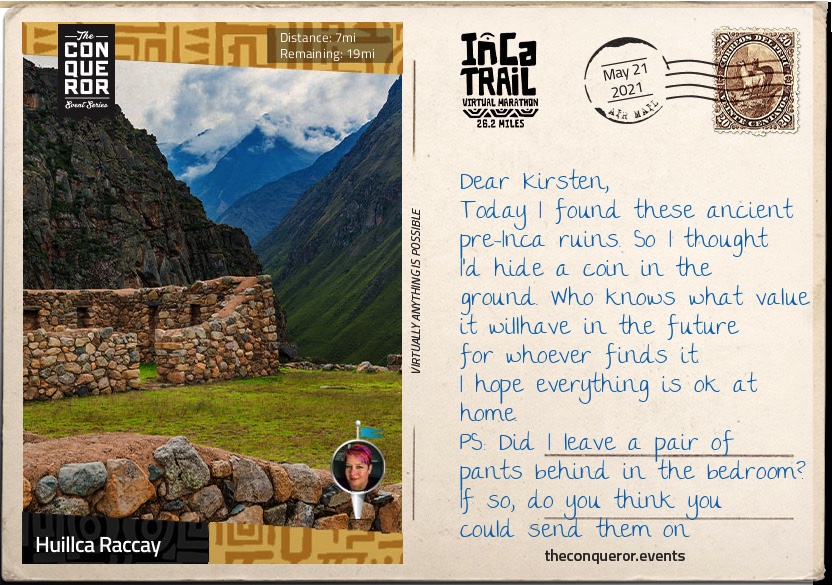 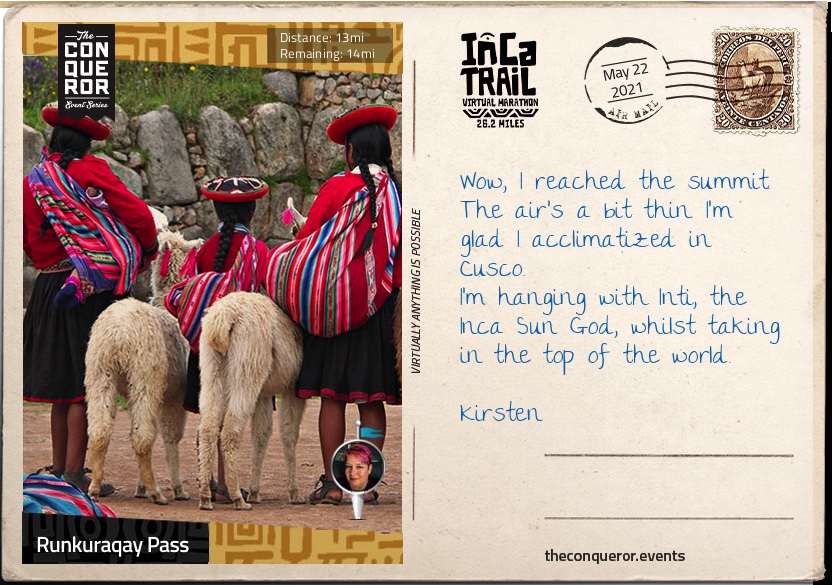 This trail is so beautiful and full of historical value and because of that, UNESCO declared it a “World Heritage” site.

Machu Picchu – A New Wonder of the World

Richard L. Burger (an American archaeologist and anthropologist) thinks that Machu Picchu was built in 1450-1460.

The reason it was built is unknown. But most archeologists agree that the city was built to be a “royal” estate.

They think that the Inca emperor Pachacutec ordered the construction for himself, most likely after a successful military campaign. However, it is interesting that although it is considered a “royal” estate, it has not been inherited.

How is the journey so far, Kirsten? Don’t forget to drink plenty of water and rest from time to time.

The Inca Trail is part of a much larger road network. At the height of its power, the Inca Empire stretched 4,023km from modern day Ecuador to Argentina. The Inca road system was one of the most advanced transportation structures of its time, linking together 40,000km of roadway. The road system provided for quick and reliable logistical support, civilian and military communication, personnel movement on official duty and control over the Empire by dispatching troops when necessary. Following the Spanish conquest in the 1500s much of the network was abandoned and destroyed. In order to preserve the history and restore parts of the network the Inca Road System, officially known as Andean Road System, entered the UNESCO register in 2014.

Much of the Inca Trail is the original construction. Imagine that with every step you take someone laid the roadway beneath your feet some 500 years ago.

The ascent to Dead Woman’s Pass is both dreaded and revered. It is the most rigorous climb reaching heights of 4,215m in a such a high altitude environment where the oxygen level is low making breathing shallower and the effort needed to move forwards greater. In the same breath overcoming the difficulty and strenuousness of the climb is also the most rewarding moment.

Following a steep descent into the valley of the pass comes a second ascent to Runkuraqay Pass. On the way are the ruins of a tampu, which was an administrative and military structure used for supplies, lodgings and depositories of quipu-based accounting records.

Quipu was a record keeping system of different knots tied in ropes attached to a longer cord. It was used in lieu of writing since the Incas did not have an alphabet based writing system

The tampu was served by conscripted individuals from nearby communities, as part of the mit’a labor system. Mit’a was mandatory public service used as the labor force to build roads, bridges, terraces and fortifications. 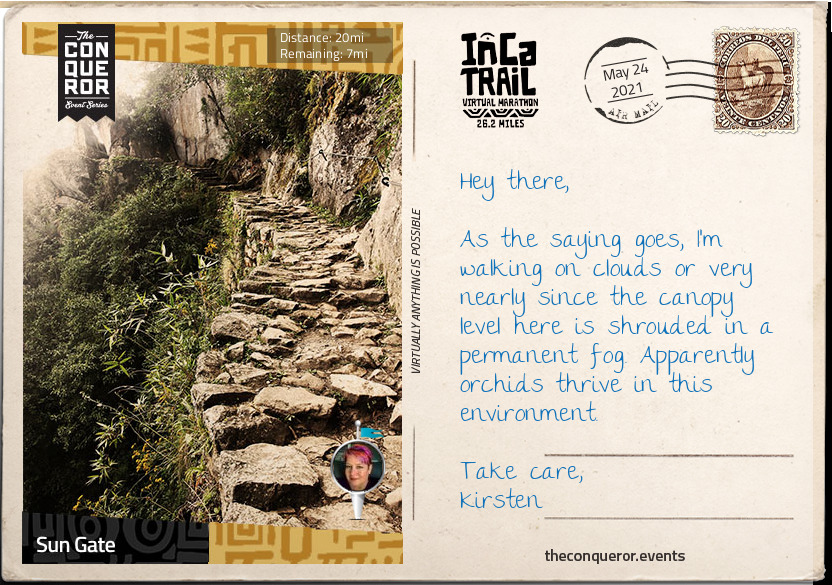 Surfacing from the cloud forest of the Runkuraqay Pass, the trail commences its descent towards the ruins of Sayacmarca with sweeping views of the Pumahuanca Mountain.

Continue on to Phuyupatamarca, one of the most intact Inca ruins, and stop to enjoy the snow-capped view of Mt Salcantay. At 6,200m, Mt Salcantay is the tallest mountain in the region. It’s Quecha name translates as wild, uncivilized, savage and as such is often referred to as Savage Mountain. The summit of Mt Salcantay was first conquered in 1952 by a French-American expedition. No easy feat since the “climb involves 1,800m of vertical gain, on glacier, snow, ice, and some rock.”

Trek onwards to Intipata and Winay Wayna, both known for their agricultural terraces and their convex shape of the terrain, to finally reach the Sun Gate for a breathtaking aerial view of Machu Picchu. Once a fortress, the Sun Gate was the main entrance to Machu Picchu and most likely guarded by imperial guards. Given the strict controls over entries, it is believed that only royalty and select guests were permitted to visit. 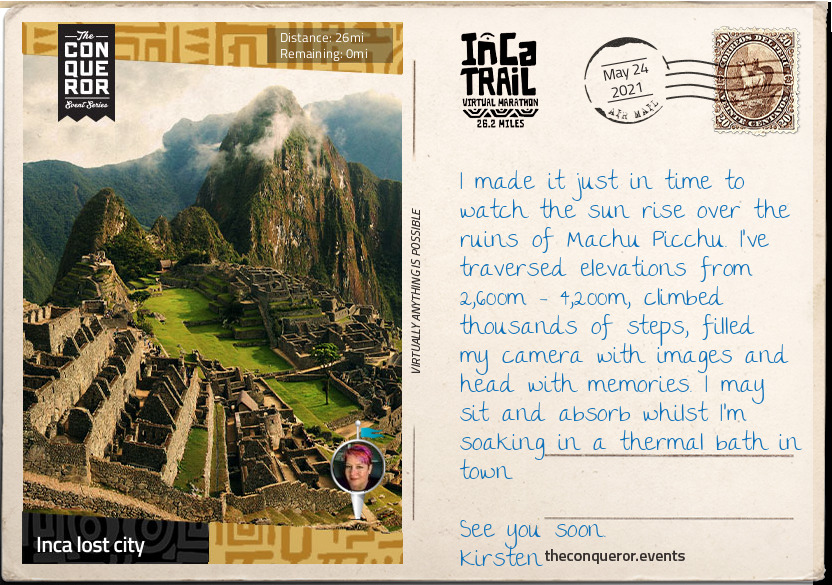 Voted as one of the New 7 Wonders of the World and listed on the UNESCO World Heritage Site in 1983, Machu Picchu is a 15th century Inca citadel steeped in mystery and myth. Thought to have been built on the request of the incumbent Emperor Pachacuti as a royal estate, Machu Picchu is an engineering marvel. Built without mortar, the stones are cut so precisely, they fit perfectly together. Sitting atop two fault lines, during earthquakes the stones knock against each other and then fall back into place.

The rise and fall of the Inca Empire lasted a mere 130 years. Following the Spanish invasion of the Inca Empire in early 16th century, Machu Picchu was abandoned with the Spanish unlikely to have ever seen it. Left to the elements the citadel was grown over by vegetation and forgotten over the centuries until 1911 when Hiram Bingham III of Yale University, visited the site as part of an expedition in search of another city. Returning the following year, Bingham spent 4 months with local labour to clear the vegetation and the next 3 years excavating and studying discovered artifacts.

From here the final descent into Aguas Calientes is on a hair-raising 9km zig-zag mountain road called Hiram Bingham Hwy. Barely wide enough to fit two cars and lacking guardrails, it is an unsealed road and a rough ride that is not for the faint of heart nor for those who are prone to vertigo.

Once you arrive in Aguas Calientes, book yourself into a thermal bath to rest and recover your weary body. Take a walk through the local craft market before settling in for dinner. Try the Peruvian national drink, the Pisco Sour, whilst indulging in the spicy and bold flavours of Peruvian cuisine.