When I started these challenges, I had some high-falutin’ plans. I was going to start dedicating specific types of activity to specific medals. I would convert time on a rowing machine to kilometres. I would row across the English Channel. Maybe I would be back in a gym again, and I would convert laps swum in a pool at the end of the day. Either way, I would be on theme.

It is May 2021. We’re still on lockdown. I’m not going to a gym. I can’t possibly fit a rowing machine into my condo next to the elliptical machine. I need to adapt to the reality of this situation, which is pretty much that I have walked some of these streets and paths enough that people are starting to recognize me. That’s unsettling… I made it through three solid years in this condo while meeting less than ten of my neighbours. How is it that a lockdown that has caused my world to contract from world travel has also caused it to expand to the point where I am starting to connect with my current home turf? Dunno, but it sure is happening.

I remain attracted to water, but my original plan is has officially been chucked out the window. Right now, my basic routes anchor around a creek, which is a good start, but I’ll need some more variety. A friend of mine has come to the rescue with a plan in the form of an Ontario Parks pass. This friend and their child are wicked smart people who figured out exactly what to get a person who is slowly going a bit crazy. Now I’m trying to figure out how to get to some of these as day trips, which means the car will finally get some distance on its odometer, too! Win-win!

Right now, the important thing is that I am still going. In the span of less than a week, I have done a massively overcast morning walk where the temperature started out at 0 °C  (with a wind chill that took it down an extra degree) and an afternoon walk in the blazing sunlight at 29 °C with no breeze at all. There are a great many countries in the world that don’t see that much temperature variation between summer and winter, let alone over a week. In spite of the extremes, I have now gotten into the habit and am easily hitting five days a week in excess of 10,000 steps a day. That’s going to have to be enough success for now. If that wasn’t enough, there’s another medal being shipped my way and another five trees planted. This has got to be the hardest way to plant a forest… 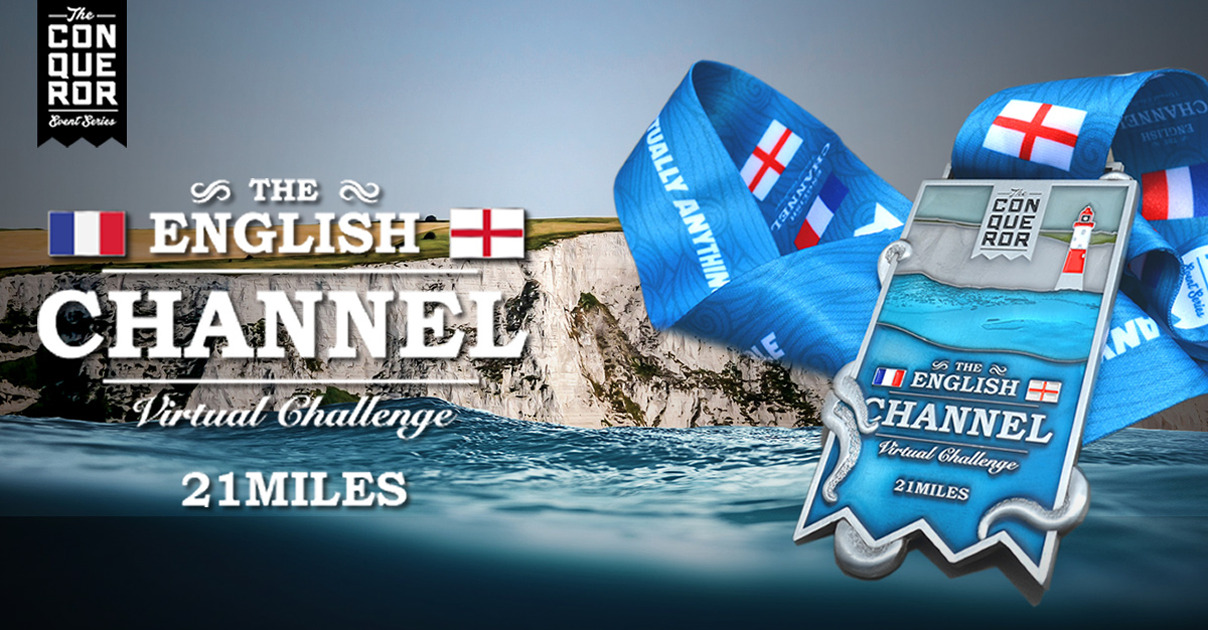 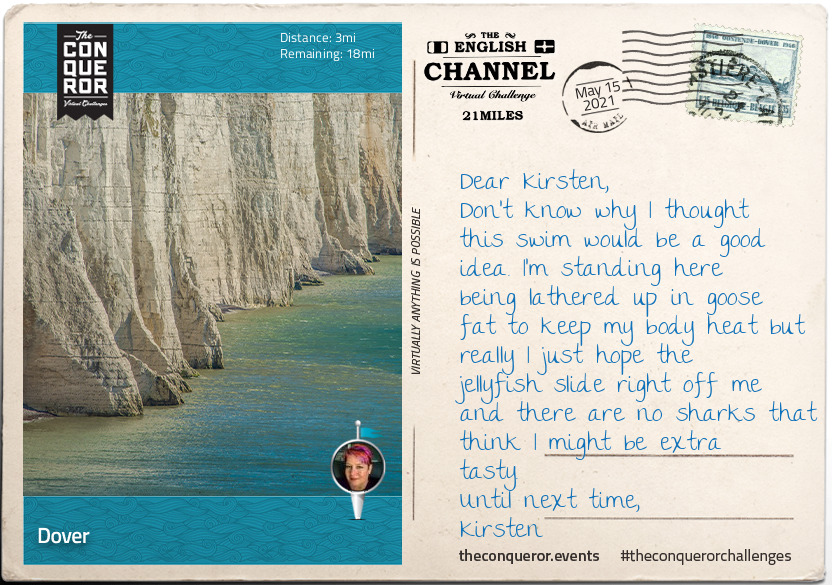 At the narrowest point of the English Channel, between Dover, England and Audinghen, France lies the famous 21mi (34km) stretch of water that is annually flocked by keen swimmers who attempt to swim across the Channel. It is regarded as the “ultimate long distance challenge”.
Taking off from Shakespeare Beach or the nearby Samphire Hoe, the swimmer lathered in grease to retain body heat and reduce chafing is supported by a team on an escort boat whose responsibility is their safety, provide the swimmer with food and ensure they maintain clear access to passing ships.

The Pilot of the boat is a licensed and highly experienced Skipper with deep knowledge and understanding of the Channel. The Pilot and the swimmer have a symbiotic relationship with one target in mind, reach the French shore.
The Pilot will continuously course correct so the swimmer swims the most direct route and with minimal deviation that may occur due to unfavourable weather conditions and currents.

Heading for Cap Gris Nez near Audinghen, the swim across the Channel is rigorous and challenging due to its varying conditions. Besides having to swim in a basic swimsuit (arms and legs must be showing, no buoyancy material), the water is cold often between 14-18°C (57-64°F) and if unlucky even as low as 6°C (43°F). The Channel may be a perfect glassy condition or as wild as 2m (6ft) high waves with strong winds.
As such the swim is rarely a direct straight line. It will usually look more like an “S” bend, navigating currents, wind, waves and of course the ever present ships.
Putting the Channel swim aside, Dover is a major port town and the closest point to continental Europe. Famous for its White Cliffs and the strategically located Dover Castle, Dover’s history traces back to Roman days. A Roman lighthouse, built circa first century AD, continues to stand on the grounds of Dover Castle.

Built in the 12th century above the white cliffs, Dover Castle played strategically important roles throughout its 800 years of history. Its grounds have been shaped and reshaped, walls and towers raised, tunnels dug from the cliff face, continuously adapting and altering to meet the changing needs of weapons and warfare.
Garrisoned until 1958, the Castle was twice besieged in the 13th century, faced the threat of invasion by Napoleon Bonaparte late 18th century, maintained naval operations during both World Wars and served as a regional seat of Government during the Cold War era.
Flanking both sides of Dover are the imposing White Cliffs of Dover. Standing at 110m (350ft) tall and stretching along 13km (8mi) of coastline, on a clear day the cliffs can be seen from the French coast.
The Cliffs’ striking white colour is a result of its chalk composition mixed with streaks of black flint. Following a fundraising campaign by Dame Vera Lynn, known for her 1942 White Cliffs of Dover wartime classic, to purchase 170 acres of land atop the cliffs and save the cliffs from developers.

The campaign was so successful it raised one million pounds in just three weeks. It is now in the hands of the National Trust for preservation and protection for future generations. 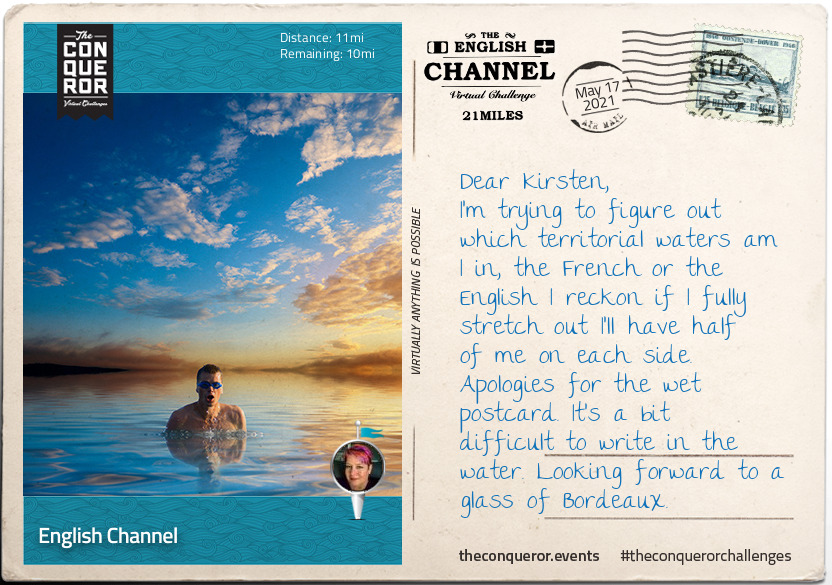 Sitting entirely in the territorial waters of France and United Kingdom, the Strait of Dover demarcates the English Channel to the east from the North Sea. Being the narrowest point of the English Channel at a mere 21 mi (34 km), the Strait is the busiest international seaway in the world with over 800 vessels per day travelling either through it or across it.

The Channel is 560 km long connecting to the west with the North Atlantic Ocean. The widest point between southern England and northern France is 240 km. The English Channel is the smallest of shallow seas surrounding the continental shelf of Europe with a depth of 120 m at its widest point and as little as 45 m at its narrowest point.

Although it’s been called various different names throughout time, such as Het Kanaal in modern Dutch, Oceanus Britannicus by Ptolemy in 2nd century and la Manche by the French since the 17th century, the first known reference to it as a Channel was on a 1450 Italian map referred to as Canalites Anglie. Dutch atlases of the late 16th century referred to it as Engelse Kanaal (English Channel) which may have been the influence to its subsequent permanent name once translated into English.

Beneath the seabed of the Channel is the English Tunnel a 50km long railway tunnel and a 20th century engineering marvel. Made up of three tunnels, two serve as railway tracks ferrying as many as 60,000 passengers a day between England and France and one is used for emergencies and maintenance. Privately funded and way over budget, the Tunnel took six years to build and finally opened in 1994.

The idea of the tunnel dates back to 1802, however, the equipment needed to cut through chalk marl were not existent until special tunnel boring machines (TBM) were designed and made to undertake the boring project. When boring from both sides of the channel needed to meet in the middle the English TBM bored downwards making way for the French TBM to cut through the middle and exit the other end. The English bore remains buried beneath the tunnel.
Travelling through the tunnel today takes a mere 35 minutes from end-to-end. 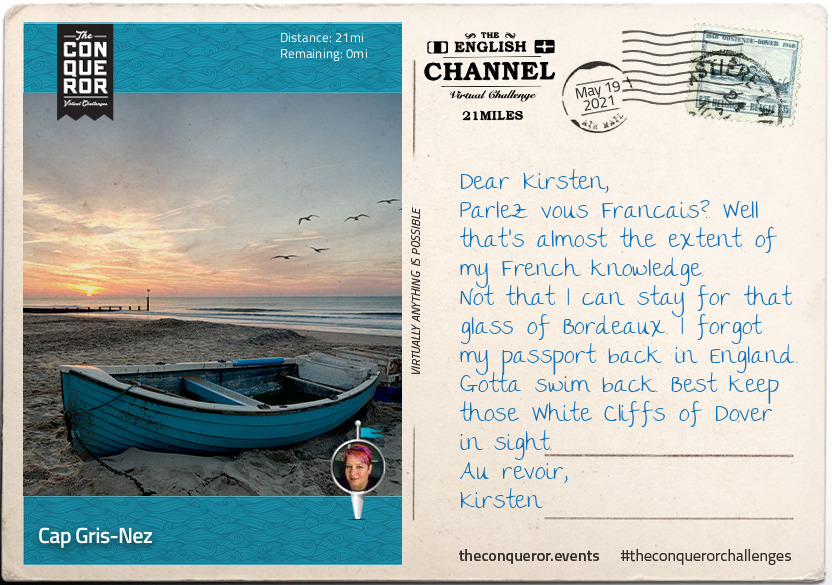 Well done Kirsten, you have reached Cap Gris-Nez on the French side of the Channel.

Located 26km south of Calais, the cliffs of Cap Gris-Nez are situated in the small farming commune of Audinghen. Named after the Cape’s grey colour, the geology is a combination of sandstone, clay and chalk. With beach deposits from the Jurassic period, fossil collectors can sometimes find extinct ammonites in the sandstones.

The top of the Cape’s cliffs provide a terrific vantage point to observe the passing ships, oil tankers and fishing trawlers and during migration season various species of birds that use the strait as a crossing point may be seen on the beaches below.

Due to its proximity to England the village of Audinghen was razed several times during the wars between the two countries. In 1544, King Henry VIII, captured the territory around the cape and built a pentagonal shaped fort on the northside with the artillery dominating the lower ground to the east and easy access to supplies via sea. Named Blackness, it was surrendered to the French by 1549. As the English threat died down, the French abandoned the fort and demolished it shortly thereafter.

Three centuries later Audinghen under German occupation was destroyed once again when the British bombed the area during WWII. The German army invaded the village in 1942 and built two batteries on the Cape, one facing Calais and the other Boulogne as part of an anticipated attack by the Allied forces. Grosser Kurfürst Battery held three 170mm guns, whilst Todt Battery had four 380mm guns that could fire up to 55km and capable of reaching the British coast.

Both batteries were protected by large concrete blockhouses. After taking heavy air bombardment and being attacked from both sides on land the German garrison of 1600 surrendered in 1944. Today, one of the blockhouses in Todt Battery houses the Atlantic Wall Museum.

To wrap up the English Channel here are some fast facts on notable swimmers: